I have a background in the sociology of health and biomedicine and have developed a special interest in new and emerging scientific and medical technologies.  Conceptually I have brought these interests together through theoretical interests in embodiment, identity and relationships.  Areas of research in the last ten years have included animal-human transplantation; genetic databases; implantable smart technologies; organ transplantation and donation and telemedicine.   In 2013 I was awarded a Wellcome Trust University Award for the project 'Animal, Mechanical and Me: The Search For Replaceable Hearts' and I am currently interviewing people who live life with an implantable cardiac defibrillator.  I enjoy working in and on the interface between science and society studying the processes and outcomes that new and emerging science and technologies produce for individuals, groups and society.  I also like hanging out with other disciplines such as engineers, scientists, lawyers, clinicians, artists  Blog: Animalmechanicalandme.com

Social Science/Art projects:  Everyday CYBORGS: Stories from the Inside Out/Outside In

In-Valid You/th: Currently underway, is a Wellcome Trust funded public engagement project, called ‘In-valid You/th’ that is allowing a handful of teenagers to make their own short film about the fictional experiences of people whose bodies have undergone repair, replacement or regeneration with prosthetics, bionics or cybernetics or non-human animal parts.  Creating a film about individuals who may have faced stigma due to apparent physical disadvantages, may resonate with the structural constraints of living in Muirhouse or other circumstances that might be difficult. The chronic economic deprivation of the lived environment requires repair, replacement and regeneration in a similar way that some young people’s bodies may do. The views of the ‘digital citizens’ born in the internet age, are key to exploring how future high technologies might be received.  The participant-actors will 1) benefit directly from learning about the film making process through the support of directors, animators and musicians and 2) gains to self-confidence through the completion and dissemination of the outcome and 3) by challenging themselves about stigma of physical difference creates opportunities to challenge prejudices about health and wealth (e.g. the ‘undeserving poor’). We have already visited Scottish Electronics Centre and the Edinburgh Royal Infirmary Cardiology Department and a Dissection at Old Surgeon’s Hall is planned

Electrifying Cyborg Heart: is a two-minute animation based on the separation of self/body and subject/object playing on the cultural iconography and scientific representation of the heart. It outlines how both the body and the self, come to accommodate the alien implant (implantable cardiac defibrillator). Cameron Duguid is the animator and used a light box technique http://www.cameronduguid.co.uk/

Maggie's ICD Story: I have also been working with one of my participant respondents who has recently been implanted with an ICD.  You can see her story (Maggie's Story) on Vimeo here:   https://vimeo.com/146917739.  It shows Maggie, newly implanted with an ICD, writing about the various emotions, inner dialogue and other people’s reactions to her, on a variety of different backgrounds (Letters, diaries, appointment cards, ECG readings etc).  She is sharing with an audience how it feels to be an ‘everyday cyborg’.  The film-maker Ross Ziegelmeier used stop-motion animation (for an example of his work see https://vimeo.com/user25397788/videos ).

Everyday Cyborgs: A story about bodies in parts (in production): An animated film that will be in 5 sequences and is based on the different stages of the cyborgisation process that starts with the implantation of a cybernetic device – ICD.  Working again with Ross, we have Helen Cowdy on board with us https://helencowdy.com/ 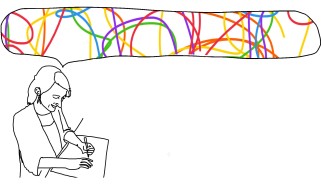 2015:  Everyday Cyborgs: Stories from Inside Out, Wellcome Trust Enhancement Award for Public Engagement.

2013-2018:  University Award from the Wellcome Trust for ‘Animal, Mechanical and Me: The Search For Replaceable Hearts.’

2012:  Have we Always Been Hybrid? Challenge Investment Fund, The University of Edinburgh.

2009:  Health Informatics Centre, The University of Dundee for a focus group study on the principles of ‘Multi-Institutional Linkage and Anonymisation’ to data sharing in the NHS.

2005-2007:  CSO, Scottish Executive to engage with the public on the subject of a Scottish DNA databank ‘Generation Scotland: The Scottish Family Health Study’.

2003:  Development Trust Research Fund awarded by the College of Humanities and Social Science to conduct a survey of the Edinburgh populations’ attitudes towards introducing financial incentives to organ donation.

2014: Wellcome Trust ‘Super-heroes from Fiction to Reality: Depictions, Impacts and the Ethics of the ‘Enhanced Human’. One day workshop.

2012: ESRC Scottish Independence Additional Funding regarding the relationship between health research and devolution.

2011: Banking (on) the Brain, Arts and Humanities Research Council.’

Vermeleun, N., Haddow, G., Seymour, T., Faulkner-Jones, A., Shu, W., (on-line access) 3-D Bioprint Me: A Socio-ethical Analysis of 3-D bioprinting, Journal of Medical Ethics.  See blog So what is not to like about 3-D Bioprinting?

*Haddow, G., King, E, Kunkler, I, and McLaren D., (2015) ‘Cyborgs in the Everyday: Masculinity and Biosensing Cancer’, Science and Culture.

*Haddow, G., Bruce, A., Sathandam, S., and Wyatt, J (2010) Nothing is really safe’: a focus group study on the processes of anonymising and sharing of health data for research purposes. Journal of Evaluation in Clinical Practice. Available at http://www.ncbi.nlm.nih.gov/pubmed/20629997 (Cit 13)

Alison Wheatley: Good Soldiers, Good Guys, and Good Parents: The Meanings of Donation and Donated Tissue in the Context of the Danish Donor Sperm Industry (2016)

Tarmphong Chobisara: The Authentic Research Relationship in Biobanks Winner in the field of law for the Anglo-Thai Society Education Awards (2016)

Annie Sorbie, What do appeals to the Public Interest do?

I am interested in identity, embodiment, organ transplantation, genetics, ARTs, public engagement, patient participation, as well as the impact that new and emerging biomedical technologies have more generally. Mostly using approaches from sociology of health, medicine and illness, and/science and technology studies and qualitative methods.

If you are interested in being supervised by Gill Haddow, please see the links below for more information: